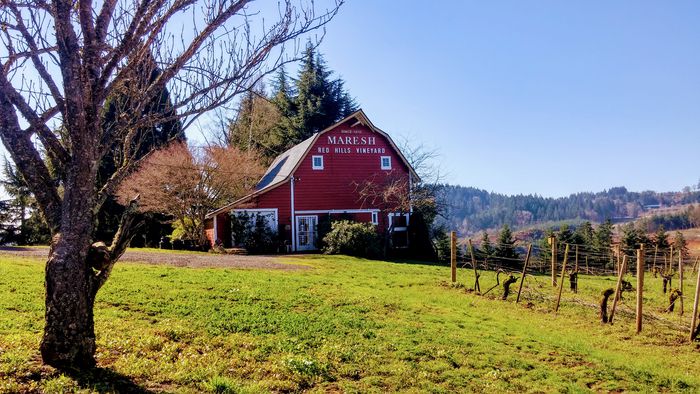 Typically, I ramble for a little bit every week, but I will change things up a bit this week and get right into it. Enjoy!

When I think back on the history of Oregon Wine, some names immediately come to mind Dick Erath, David Lett, Dick and Nancy Ponzi, Susan Sokol Blossor, along with Bill Blossor, and we can’t forget to include David Adelsheim. There are many others I am leaving off the list, but these are the handful that pops off the top of my mind within a matter of seconds. If given five minutes, who would you add to the list? Let me rephrase the question. Would you add Jim Maresh to your list if you pondered over the history of Oregon Wine? Do you know who Jim Maresh is? I do not doubt that a handful of people know this man on the tractor with the Big Red Barn, but most of you probably do not. Today is all about Jim. Is your Saturday morning coffee poured and ready to go? Before we get going, a modest disclaimer. Usually, my content comes from my personal interactions. Unfortunately, I have not met Jim, which means I am pulling content from different places today for you while you sip your coffee. Here we go!

As with any story, you need to start at the beginning to appreciate the end. Jim’s story begins in 1926 outside of Milwaukee, Wisconsin, where he was born. At the age of 20, Maresh was already in the Navel Reserve and attending Marquette University in Wisconsin. One evening Jim reluctantly participated in a social event called a dance. Do you remember dances? At the event, he met Lois “Loie” Hansen, a student at the Wisconsin State Teachers College in Milwaukie. Loie had no interest in attending the dance either, but her friends insisted. It’s a good thing they both attended because two years later, in October 1948, they were married.

At this point, Jim was working for Dun and Bradstreet in Portland, and the couple honeymooned at Timberline Lodge, where they were the only guests. Who wants to be at Timberline in October with no snow? They had a blast, though, and had to walk down the mountain to hitch a ride with a friendly truck driver. They didn’t have enough money to get them back to Portland.

Working for Dun and Bradstreet, Jim and Loie moved around, including San Francisco, and eventually back to Oregon. The couple had five kids, and the desire to live in a house with more space was needed. A view in the country contributed as well. On Worden Hill Road, there was a 27-acre farm for sale known as the Olmsted Farm. Jim only wanted a couple of acres but ended up buying all 27 acres filled with prunes, cherries, and filberts. The widow who owned the property wanted to get rid of the whole kit and caboodle. With $7,000 down, Jim and Loie owed $20,000, and we set for a ride of a lifetime.

We all know where Worden Hill Road is for those of us in Oregon and familiar with Wine Country. With Jim working in downtown Portland, can you imagine the commute? I live in Tualatin, and for me to get to Worden Hill Road today, it takes me a solid 40 minutes. For me to drive downtown, it is easily 30 minutes. Can you imagine commuting 70 minutes a day to work? Neither can I. Lucky for Jim; his commute was 32 minutes. In 1959, Newberg had zero stoplights, there was one stoplight on Hall, and Sherwood was known as “Six Corners.”

Jim recalls coming home after his first day of work, asking Loie how the day went. Her response was, “Oh God, I sure hope we can sell this dog of a farm for what we paid for it.” You have to understand with five kids who were used to city life, being out in the country on a farm is a sharp contrast. It didn’t take long to appreciate the life of being on a farm. The kids ended up with horses and chickens. Soon enough, the whole family fell in love with the place.

ver the years, nearby farmers wanted to retire, and Jim bought their land. His 27-acre parcel, at one point, turned into 155 acres. Other accounts on the web say he had almost 200 acres. Is 155 practically 200? Can you imagine owning 155 acres, being the Navel reserve, working a full-time job, being a husband and dad to five children? Here we are in 2021, some 60 years later, complaining we work too hard and getting burnt out. Maybe there is something to take away from all of this? Side hustles have been around for a long time!

Jim took to the farm life, enjoyed it, and had quite the passion about it. In the mid-’60s, the Allen Fruit Company sold 500 acres of land to Standard Investment, Inc who wanted to build subdivisions. Neighboring farms of Jim included John Meyer and Fred Holzmeier. The three of them approached the county commissioner’s office because it would conflict with their ability to farm correctly. With 600 acres between the three of them, they prevented the development, but only by the skin of their teeth.

Ok, thank you for sticking this far into the story. I know I haven’t mentioned how all of this relates to Oregon Wine Country yet. How is your coffee? Take a sip and imagine, if you will, it is 1968 or 1969 on a Saturday afternoon, and your dog starts barking at an unfamiliar beat-up BMW driving up your driveway. Your dog’s name is “Herman the German.” You look out the front window and see a large bearded man getting out of the car with a bunch of papers stuck under his arm. What do you when he knocks on the door? Jim wasn’t sure what to do either but reluctantly opened the door and invited the man inside.

The person at the door introduced himself as Dick Erath and said something like this when he introduced himself, “I’ve looked all over the west coast for a great viticulture site, and I think you’re sitting on it.” What does one say to that? It is little like Morpheous telling Neo, “You’re the one.”

Thinking back to the late 60s, the only vineyard in Yamhill County was David Lett’s. During the Saturday afternoon conversation, Jim queried as to what is needed to start. Dick replied, “We’ll build a greenhouse on your property, and I’ll get the cuttings from Wente. We’ll propagate cuttings for planting.”

Working for Dun and Bradstreet, Maresh knew he needed to get all of his ducks in a row for a greenhouse bank loan. Presenting his list of equipment to the banker, Jim was asked why he was building a greenhouse. His reply after a long hard swallow was, “Well, we’re going to grow wine grapes.” The banker, not having the inside knowledge of Lett and Erath, denied the loan by saying, “You can’t grow wine grapes in Oregon. It won’t work.” From that point forward, the greenhouse was known as the “Diesel Greenhouse” because Jim took money from his diesel budget to fund the greenhouse.

In 1970 three acres of vines were planted. Two and a half acres of Riesling and a half-acre of Wadensville Pinot. In the 70s, everyone wanted Riesling and wouldn’t even touch Pinot. Funny how times change, isn’t it? On a slightly off-topic tangent, I think Riesling will make a comeback in the coming years. More and more winemakers are giving a whirl.

There are so many stories I found surrounding Jim. I could go on and one, but I need to find some sort of stopping point and wrap things up into somewhat of a nice bow. Jim sold grapes to Dick Erath and never had an interest in becoming a winemaker. Jim’s son-in-law Fred Arterberry also made grapes from Jim’s vineyard. Fred is described as being meticulous about the fruit in the vineyard and, of course, the wine. Jim would walk into the Arterberry’s winery with dirty boots and would not be allowed inside. Arterberry made excellent wine and in 1985, which scored a 98 from the Wine Advocate earning him a top winemaker credential showcasing the Maresh vineyard. Jim’s daughter, Martha, and Fred had one son named Jim Arterberry Maresh in 1983. The Arterberry label ended in 1990 when Fred passed away.

If you have heard of the Little Red Barn, this is the tasting room Jim and Loie open in 1987. You can go there today and visit to taste the different wines produced from the vines Jim’s hard work and dedication went into. I would say visit and tell them A.J. sent you like I always do, but they don’t know me since I haven’t been. At some point this year, I will go and take in a piece of Oregon Wine history. From what I read, Martha and her second husband, Mikami, work the vineyard while Martha’s son, Jim Arterberry Maresh, is the winemaker under the Arterberry Maresh label.

You might be asking why are you highlighting and showcasing a winery you haven’t visited like usual? If you are not asking this question, maybe you should be as you take another sip of coffee. Well, I wanted to learn about a man who played an essential role in the community, pass it along to you, and pay respects to a man who lived an abundant life. Jim Maresh passed away on March 6th, 2021. One month shy of his 95th birthday.

Sources of my stories and pictures

​The Boys Up North – Paul Pintarich