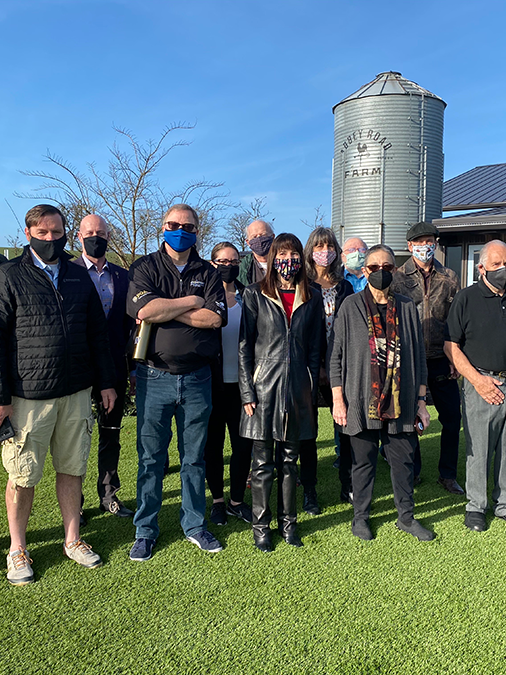 Last Saturday morning was the exact opposite of a lovely relaxing morning. Before the thought even enters your mind, the last thing I am doing is complaining. The last time I had to be somewhere before 9 am on a Saturday was way before we knew anything about COVID. Today I needed to be at Abbey Road Farm before 8:45 to help judge wine for the McMinnville Wine Competition. Typically, this is part of SIP held at the Evergreen Aviation & Space Museum, but you are smart, and there is no need for me to tell you why SIP didn’t happen. The judging, initially scheduled for January due to Oregon restrictions, put it off a bit. I am glad it was held in March instead of January. In January, the event would have happened outside, and I would have frozen my patootski off. Even in a dark deep wine-colored sports coat last week, I was a tad bit cold.

I got my morning Chai, checked my 400+ blogs, and Globgor got his morning. If you saw my IG story, I tried my best to warn you the day would be filled with wine, and I wasn’t kidding. So much wine! I made it to Abbey Road Farm a good 5 minutes early, met with a couple of the other judges, and got established. The night before, I heard another judge mention he would bring his glasses since everything we were tasting today was out of Pinot glasses. Under the stealth of my tan Patagonia backpack, it was stylish as all get out with my deep dark purple sports coat were two universal Zaltos. I was ready for anything, even though they never saw the light of day.

The judging situation was very COVID friendly but not the best for collaborating. There were three panels of judges with four judges in each panel. Every judge sat at his or her table connected to the other judges. I was 10 feet away from the closest person, and with all the talking going on, it wasn’t easy to hear the other judges in my panel at times. Again, I am not complaining, only stating a fact. The other judges in my panel included Ken Robertson, Wine Press Columnist. Chris Czarnecki, owner, and chef at the Palmer House. Maxine Borcherding, a veteran of the SIP, along with being a Chef, Somm, and Wine Educator.

As judges, we needed to rate the wine with Gold, Silver, or no medal. Once we decided, the group would choose on what to score the wine overall. I had my wine journal ready to go, the printouts for every flight, and of course, I was typing every entry into my iPad.

Our first flight was a sparkling Pinot. Chris was immediate with his response, gold. I was still looking at the concentration of bubbles and color. I had yet to sniff nor taste the wine. Gulp! Immediately, the pressure was there to play catch up. A little sniffy sniff, taste, and swallow. WAIT!!!! No swallow, stop!!! You cannot swallow. You must spit! Yes, stop and spit. You cannot afford to swallow. Otherwise, you will be an absolute mess come dinner time. The bubbles were delicious, and I agreed with Chris, gold. I am sure everyone in the panel agreed this was a gold which meant the wine got a double gold.

We started our first flight around 9:30 after introductions with lunch around 1:00-ish. Our panel of judges was behind the other two by 5-6 flights. We tried to pick up the pace a bit, but we seriously needed a break. Our palates were shot. Some on our panel were feeling the alcohol intake. Since COVID, their intake of alcohol had decreased tremendously. We broke for lunch, and food never tasted so sensual! I have to admit there were some reds I tasted where the tannins reached into every little nook and cranny of my palate, making my face appear I ate the sourest of sours Apple Jolly Rancher in the universe. Next, you are going to ask me what were those wines? I don’t know. Everything was blind, and I only noted the number on the wines I enjoyed and wanted to learn more about.

After lunch was round two of the competition, this round was about dwindling down the gold winners to the best Sparkling, Red, Pinot, White, and eventually the best in show. All the judges would get a flight, pick their favorite, and whichever wine had the majority of votes went on to the next round. Oregon is known for Pinot, so you can only imagine how many Pinots there were to taste and eliminate.

There was one White Pinot mixed into the Pinot category that stood out for me. It was the 2018 Fleur de Lis White Pinot from Brandborg Vineyard in the Umpqua Valley. My judges’ panel gave it a double gold, but when it came to the second round for Pinots, I was the only judge in the entire room who raised my hand. Sigh. I wished the winery would have included in the whites category instead of the Pinots, where it would have had a better chance of getting the best of show.

By 5:30, we are still going at it, and to say it was a long day is putting it mildly. Fun, but also feeling like a steak on the grill whose juice has spilled out for the flames and starting to turn a rubbery slab of insignificance. On top of that, Globgor was at home in his crate. Poor guy. Back to the wines. We were in the process of picking the best in show. It came down to a white blend and a Pinot. I needed to stand up, not from the intensity, but simply from all the sitting. I would be lying if I didn’t say it felt a bit like a round of Hold ‘Em waiting to see the other cards on the table with all my chips in the center up for grabs. My vote was on the White Blend. Where was everyone else? It wasn’t a unanimous vote, but it was a solid 75+% majority for the White Blend of 51% Roussanne, 44% Marsanne, and 5% Viognier. I am going to stop there for a second. Look at that blend! We are talking about Oregon here, which is known for its Pinot and Chardonnay. A blend of Roussanne, Marsanne and Viognier wowsers! This wine is not a fluke. It won best white wine for the 2020 Oregon Wine Competition. I am liking where Oregon is going with its winemaking prowess! Here is the results of the competition for you to look over!

Reflecting on the event a bit. It amazes me how we have consistently overcome the obstacles presented to us over the last year. Yes, the event was postponed from the original date in January, and yes, there were safety protocols in place. I remember most about the event were the wines, the judges, and all of those involved with the event. It was splendid on so many levels!

Once I got in the car with my second Chai on Sunday, I thought about a blog post Jamie Goode wrote last month titled “What can wine critics learn from music reviewers?” It’s an interesting concept to ponder. Think about the first time you hear a song. Do you immediately like it, or does it take a few listens for it to seep deep into the brain where it will be stuck for an eternity? Or there is a chance the first time you hear the song, and you blow it off only to be sucked into its melody during some event. Wine can have this same effect. Here I stand, conflicted. The purist side of me says, “I was rushed and needed more time to feel the wine.” The practicality of it, though, there wasn’t time to sit with every wine. Wine is abundant and time is a commodity we can never get back. Having a consensus for each panel felt like a satisfactory compromise to me sitting with a bottle of wine for a couple of days. Four people agreeing no medal, silver, or gold. Simple, and I like it.

I look forward to attending more competitions in the future, and in the meantime, I am taking this quote from Tim Atkin’s email this morning to heart.

At the Melbourne Wine Show a few years ago, our chair Steve Webber gave the assembled judges a pep talk before we started. “I don’t want you to give a Gold Medal to anything that you wouldn’t order a case of yourself,” he said. That’s my approach too. And if that means I disagree with some of my peers from time to time, so be it.

That’s what makes being a wine critic interesting.